The argument is well known: through the story of Ebenezer Scrooge, a miserly old man who detests Christmas, the work of Dickens begins a journey towards the recovery of the Christmas spirit, reflecting on the values of these festivities, at the hands of the spirits of the past, present and future Christmases.

Dickens’ homage to Christmas has turned the novel into one of the most popular, and on these dates, televisions remember it with some adaptation. 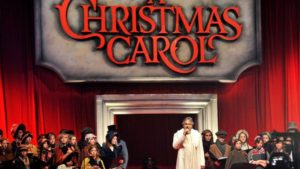 The first adaptation of which one has proof, belongs to the silent film era.

Directed by Walter R. Booth. The bulk of Dickens’s work was summed up in six minutes and twenty seconds (it is almost three and a half) and was titled: Scrooge or Marley’s Ghost.

Here, the ghosts of Christmas do not appear, but it does the spirit of Jacob Marley, the former business partner of Ebenezer Scrooge, as the only specter that confronts the miser protagonist.

The 1938 Metro-Goldwyn-Mayer version of Christmas Carol was edited by Edwin L. Marin. She is the first known to use the name of the novel for the title of the film, with a romantic approach different from the work of Dickens.

It was expected that Lionel Barrrymore would put himself in the shoes of Scrooge, but when suffering from arthritis he could not do all the paper and, instead, Reginald Owen did.

For fans and critics, the British film, of the same title as the previous A Christmas Carol, this time directed by Clive Donner and made for television in 1984, is one of the best adaptations of the original story to date.

This consideration is due, according to the specialists, to the dramatic seriousness of the plot, as well as to the faithful recreation of the Victorian and Gothic atmosphere of the novel, turning the film into what Dickens’s story was: a story Christmas ghost.

The Muppet, also known as the Muppet, had their own adaptation to entertain the little ones, without ceasing to soften the bigger ones with the background message of the original story.

The famous actor Michael Caine got into the role of Scrooge, accompanied by the famous puppets in this children’s and musical version, directed by Brian Henson.

You could not miss a version of pure comedy, starring a genius of this genre: Bill Murray, in the role of egotistical executive Frank Cross, in the film Scrooged made in 1998 who, like Ebenezer Scrooge, ignores his family and exploits your employees.

Directed by Richard Donner, the film took advantage of the presence of Murray and his fame as Ghostbusters to make winks to the famous saga, so, although it is inspired by the work of Dickens, is an adaptation made to laugh at Christmas.

When a work is adapted so many times, it does so for different genres and, indeed, there is also a musical based on the Dickens story.

In 1994 Alan Menken composed this play, with lyrics by Lynn Ahrens. In 2004, director Arthur Allan Seidelman rescued her for television.

Here, Kelsey Grammer plays a theatrical Scrooge, which history presents as someone good whose circumstances pushed him towards that bitter and greedy character we know, all narrated with music.

THE DISNEY VERSION “TO CHRISTMAS CAROL” OF 2009

Disney also made its own adaptation of A Christmas Carol in a computer animation film made in 2009, thanks to the motion capture system, which was directed by Robert Zemeckis and starring Jim Carrey, counting on Gary Oldman in the cast.

A film that stood out for the quality of its images, the interpretation of the two main actors and the dark tint it offered that, on the other hand, represents the original story. This film was used to turn the story of Dickens into a video game for the Nintendo DS.

The story of the film is completely detached from Dickens’ story, but drinks from it as root inspiration, and maintains the same message and values.

Instead of the ghosts of past, present and future Christmas, here the