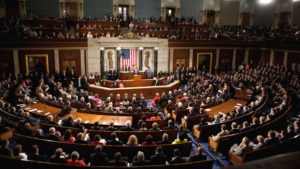 The plan of the Republicans was to approve this Tuesday the tax reform project in Congress so that Trump could ratify today with his signature at an event in the White House.

When the debate had already begun in the Senate, the Democrats found technical flaws in the text approved by the House that twisted the plans of the Republicans and forced a new vote in the morning.

If the vote continues, now, according to plan, the president could ratify the bill today and achieve his first legislative success since he arrived at the White House almost a year ago.

Tax reduction for middle and upper class businesses and households

The final version of the project, which was published in the early hours of last Friday, includes, among other measures, the reduction of taxes on businesses as well as US households of middle and upper class.
In this sense, a cut in Corporate Tax is expected from the current 35% to 21%. It also includes a 20% deduction for owners of small businesses, such as associations or individual companies.

Likewise, a tax is included on the profits generated abroad of up to 14%, with which the US government seeks that the companies repatriate a large part of the almost 2 billion dollars they accumulate in their foreign subsidiaries.
Another of the most controversial measures in the agreement is the repeal of one of the key provisions of the health reform adopted in 2010 by the then president, Barack Obama, and that forced all Americans to have health insurance or face a fine.