The president of the United States, Donald Trump, has assured today that his country faces “powerful rivals” like Russia and China, with whom it pretends to look for “collaboration”, but always in favor of the interests of Washington. 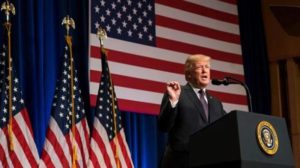 The president has recognized the new challenges facing the US UU during the presentation of his national security strategy, a document that his team has taken to elaborate “almost a year”, but that pretend to integrate “every aspect of the American strength”.

Trump has insisted that first we must recognize “the mistakes of the past to put the United States in the place it deserves”, and has emphasized the need to “create borders”, “protect the homeland” and include an international economic plan that defends also your interests.
“We will defend ourselves and our country as we never did before,” the president said in a solemn speech from the Ronald Reagan Center in Washington.

Regarding the influential capacity of Beijing and Moscow and other international actors, Trump has assured that the United States “will develop new ways of confronting those who use the new domains, such as cyberspace and social networks, to attack” the country and its society.
Trump has insisted, moreover, that “a nation without borders is not a nation”, “a nation that does not protect prosperity in the country can not protect its interests abroad” and “a nation that is not prepared to win a War is a nation that is not capable of preventing a war. ”
“Revisionist Powers”
For the Trump government, the United States faces “revisionist powers” that try to put the world in conflict with American values, among those that identify China and its role in the South China Sea; and Russia, in the cases Ukraine and Georgia.
But it does not leave aside the dangers that, in his opinion, suppose for the country the entry of immigrants and the infiltration of jihadism both within the United States and in other countries.